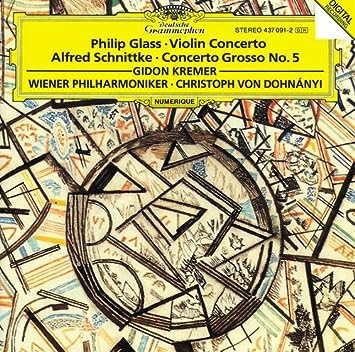 “The search for the unique can lead to strange places. Taboos — the things we’re not supposed to do— are often the more interesting. In my case, musical materials are found among ordinary things, such as sequences and cadences.”

When Philip Glass wrote his first major orchestral work, this 1987 Violin Concerto, his compositional “search” indeed led him to the ordinary. Glass, best known at the time as a composer of music for opera, film, theatre, dance and his own Philip Glass Ensemble, took on one of the most enduring genres in Western art music. In so doing he cast it in most familiar terms.

Glass’s Violin Concerto falls into the three-movement structure common to the vast majority of concertos written in the last three centuries, and is scored — as are his operas— for an orchestra of conventional size and configuration. “I like the normal orchestra,” he commented at the time of the première by the American Composers Orchestra (Dennis Russell Davies conducting and Paul Zukofsky, violin) on 5 April 1987. “I have an alternative electronic medium, which is my ensemble. By writing for both there’s a balance in my activities.”

Familiar, too, are the opening chugging chords, the solo violin’s first arpeggios, and the repetitive patterns that cause time to be absorbed into large units rather than to be divided up: the Concerto is instantly identifiable as music by Philip Glass. “This piece explores what an orchestra can do for me. In it, I’m more interested in my own sound than in the capability of particular orchestral instruments. It is tailored to my musical needs.” Also to his dramatic needs: Glass observed that the concerto form “is more theatrical ond more personal” than pure orchestral music.

Born in Baltimore, Maryland, on 31 January 1937, Glass was on a conventional career path (studies at the University of Chicago, the Juilliard School, and with Nadia Boulanger) when in 1965 he met Ravi Shankar in Paris and worked with him on the film Chappaqua. The collaboration resulted in a radical rethinking on Glass’s part, toward a music structured by repetitive rhythmic patterns.

To explore this new idiom he formed the Philip Glass Ensemble in 1968. Within ten years Glass was writing large-scale operas and theatre pieces that brought him worldwide fame: among them, Einstein on the Beach, Satyagraha, Akhnaten, The Juniper Tree, The Photographer, The Voyage (a Metropolitan Opera commission to celebrate the Columbus quin-centenary in 1992). Glass has also written film scores: Koyaanisqatsi, Powaqqatsi, Mishima and The Thin Blue Line; dance scores for Twyla Tharp, Laura Dean, Lucinda Childs and Molissa Fenley; and, since the Violin Concerto, a number of works for orchestra, including The Light, The Canyon, and Itaipu (for chorus and orchestra). Projects under way in the early 1990s include Orphée, a chamber opera; The Palace of the Arabian Nights, a collaboration with Robert Wilson; and an opera entitled White Raven.

The violonist for whom this Concerto was written, Paul Zukofsky, was a close colleague of Glass’s and had long urged the composer to write a concerto. He collaborated closely with Glass during the composition of the piece, asking, for example, for a slow, high finale. Glass’s plans to comply were thwarted when he found his original conception of a piece in five short movements giving way to a long first and second movement. “The material finds a voice of its own,” he conceded, revealing that the Concerto’s three-movement structure was actually “an accident”. While Glass ultimately wrote a fast thrid movement, its slow coda both satisfied Zukofsky’s request and harkened back to the other two movements. The violinist also offered suggestions in the first movement that had large-scale harmonic implications: “I heard the piece with a ‘tonal identity’ of C minor and D,” recalled Glass, “but by moving it up a step the violin sounds far better.” Glass found their collaboration highly satisfactory: “This is the piece that I wanted to write.”

COMPOSITIONS:
Concerto for Violin and Orchestra