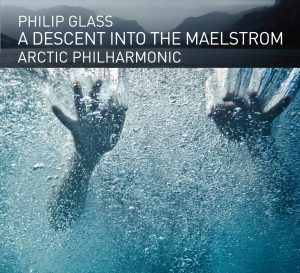 ">
A Descent into the Maelström
2019
Music by Philip Glass
The Philip Glass Ensemble
Michael Riesman, Conductor

In 1985, Philip Glass composed a “dance-theater” work based on Edgar Allen Poe’s 1841 short story “A Descent into the Maelstrom” as one of the last pieces written for the original Philip Glass Ensemble (keyboards and woodwinds.)

A few years ago Norwegian filmmaker Jan Vardøen decided to make a film about the Poe’s story which is set in the Arctic Circle near the Lofoten archipelago in northern Norway. At the same time, Vardøen discovered Philip Glass Ensemble recording of the work.   As part of his film, Vardøen conscripted the Arctic Philharmonic Orchestra and arranger Alexander Waaktar to adapt the music for full symphony orchestra, voice, and synthesizer, all under the baton of Tim Weiss.  The result is a dramatic new interpretation of a little known major Philip Glass work.  This new recording from Orange Mountain Music marks the first recording of this dynamic piece in this new orchestral form.

Compositions:
A Descent into the Maelström

Thirty years since the beginning of the Glass/Bowie/Eno symphonic trilogy, the journey ends with LODGER SYMPHONY from Orange Mountain Music