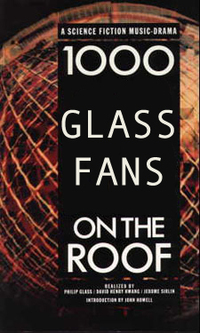 Since posting my first news item on March 27, 2007, this site has received 10,000 visitors.  Thank you all for coming and continuing to support Glass Notes.
Also, for those new visitors, let this post serve as an invitation to contribute as often and as much as possible.  There are constantly small Glass events happening around the globe which are often not very well publicized.  It is the benefit to all who enjoy and support this music to have an open forum to share and discuss.
Speaking of discussions, much has been argued since the New York Times article citing history’s most important "minimalist" recordings.  Steve Smith of Time Out NY and the NY Times whose list of 4 recordings included 3 Glass recordings, has talked about it recently on his blog Night After Night.  My own feeling is that most of the pieces listed were not even remotely "minimalist" but merely possessed a minimalist "sound." By and large, Minimalism is music preoccupied with process.  Glass has often spoke of his distaste for the term but accepts it for early pieces up to and including Music in 12 Parts.  To imply that Akhnaten, Adams’ Nixon in China or any other number of pieces on the  list are "minimalist" pieces is wholly inaccurate and displays a great misunderstanding of the movement; At the very most it’s a stretching of the definition to a point where any music  with any sort of pulse or repetitive element can be categorized as minimalist.
I contributed to the Night after Night discussion by stating if we are to include pieces that sound minimalist, why not include Satie, Bernard Herrmann (Psycho, Vertigo) or Beethoven’s 5th?   Beyond definitions though, I’m very pleased that some of this great music, minimalist or post-minimalist, is earning the attention it deserves.