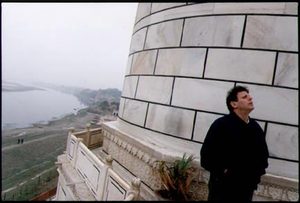 It’s curious that with such hoopla surrounding composer-birth-years that 2008 looks to be a strong year performance-wise for Glass operas.  I recall 2006 as "Mozart 250" and how the whole exercise seemed interminable when one considers that there has never been a year where that composer’s music wasn’t celebrated.  Rare is it for a living composer to have as many operas being produced the world-round, and 2008 (a year after his 70th birth year), a non-birth year for Glass, is proving bountiful.
In addition to his many dates performing (Book of Longing is solidly scheduled throughout the year), the world’s opera house orchestras are practising their arpeggios in preparation for, as I count them at present, SIX different operas being performed by NINE different companies.
Tokyo Chamber Opera Theatre is performing "In the Penal Colony"; The Metropolitan Opera performs "Satyagraha"; Companies in Denmark, England and Germany perform "The Fall of the House of Usher"; The Erfurt Theater of Germany travels to London this summer to perform the captivating and politically charged "Waiting for the Barbarians"; Opera Theater of Pittsburgh travels to London’s Covent Garden to perform "The Sound of a Voice"; and companies in Spain and Germany (Munich) perform "La Belle et La Bete."
"Belle" is of particular interest to me because as with the Oakland Opera Theater’s production, in Spain and Munich it is the Glass opera without the Philip Glass Ensemble and presumably without the Cocteau film.  I would love to see how it exists independent of those two entities.  I had the chance to see "Voice" at its premiere run at Harvard (already) years ago. In many ways that work is outside the norm for Glass with its orchestra of pipa, cello, flute, and percussion.