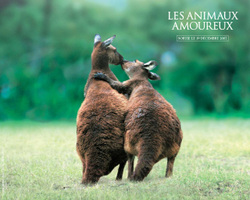 The new film ANIMALS IN LOVE (les animaux amoureux) is opening in France in December.  The very cool new score by Philip Glass is being released by Polydor in Europe. It’s available Dec. 10 as you can see here at the French Amazon store.
ORANGE MOUNTAIN MUSIC will be releasing it (with American packaging) in the US shortly after the holidays. The film will presumably be released in the US once they have a famous actor record the narration in English.  The film is about the existence of love in the animal kingdom.  The score is sweet and is filled with beautiful melodies. The sound-clip you hear on the film’s website doesn’t do it justice.  It’s worth noting that the two discs differ in that they are actually different mixes of the audio.