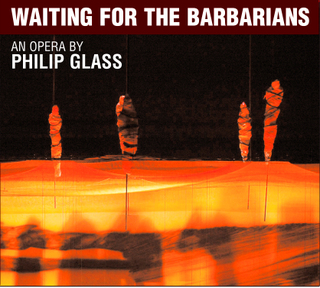 José was the first to discover that Philip Glass’ Waiting for the Barbarians, which is being performed at London’s Barbican June 12th, is being released by Orange Mountain Music.  The company’s Newsletter confirms it.
For those unfamiliar, this is Glass’ 2005 opera has more than just a little contemporary relevance.  The 1980 story by J.M. Coetzee, which was optioned by Glass in 1990, tells of a village on the fringe of an Empire that is overtaken by military officials from Empire who claim the "Barbarians" are about to attack and therefore it’s necessary to launch a preemptive war, a "short quick war to safegaurd the peace." Of course they also torture innocent prisoners without cause or trial: "normally speaking, we would never approve of torture, but I think it’s widely understood that this is an emergency"….

It’s all too eerie that the book is from 1980.  The timeless thing about this opera is that the music is just wonderful and perfect for the story of our recent times. I don’t recall such a "traditional" narrative opera from Glass and baritone Richard Salter as the Magistrate, an imperfect man, does a magnificent job.  In Stores and on iTunes June 3 in the US (May 26 in the UK in advance of the performance at the Barbican).