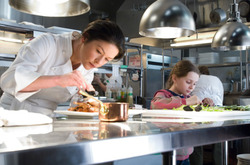 July 27, 2007, No Reservations directed by Scott Hicks, hit theaters.  The official soundtrack released features 2 tracks from Philip Glass’ original score.  No more complete release of the score is planned.  You can hear a bit of the music on the film’s official website.

You will notice in the film’s acting credits, PHILIP GLASS (MAN at CAFE)

7 thoughts on “No Reservations – film/soundtrack”