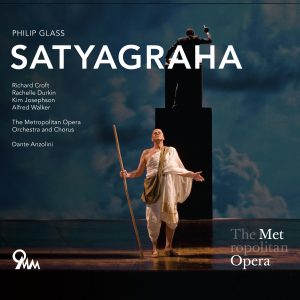 Orange Mountain Music and the Metropolitan Opera are proud to announce the release of Philip Glass’s opera SATYAGRAHA across a variety of media.

SATYAGRAHA portrays Gandhi’s years in South Africa during the time he developed his tools for social transformation through nonviolence.  Captured at the 2011 revival of the work, the production was directed by Phelim McDermott and Julian Crouch and starred Richard Croft as Gandhi along with a stellar cast with the Metropolitan Opera Orchestra & Chorus under Dante Anzolini.

Video is released on DVD, for download in HD on iTunes (for rental or purchase), streaming on the Met Opera’s On Demand Live in HD  subscription service, and the audio is available on all major digital platforms, including Spotify and Apple Music. 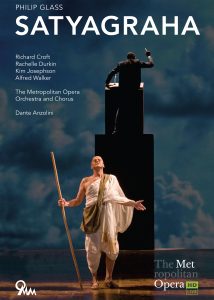 Sung in Sanskrit from texts drawn from the Bhagavad Gita, the opera dramatically portrays the vocal text was by Constance DeJong with book by Philip Glass and Constance DeJong. The Met Opera’s co-production with the English National Opera was heard in New York in 2008 and 2011 and in London in 2007, 2013, and 2013.