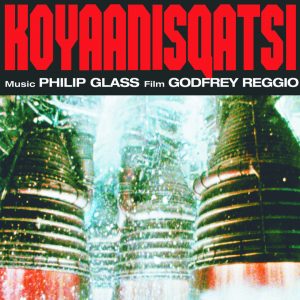 Orange Mountain Music is proud to announce the special RECORD STORE DAY 2020release of the complete soundtrack to the classic film KOYAANISQATSI for the first time on vinyl and limited to 1500 numbered units.

Directed by Godfrey Reggio with an iconic score by Philip Glass, KOYAANISQATSI premiered in 1982 and quickly became a cult classic.   With cinematography by Ron Fricke and containing no plot or words, KOYAANISQATSI was interpreted by some to be an anthem for the environment and by others to be an indictment of modernity.  Overall, the film was hailed for its pioneering techniques which have been variously imitated over the past four decades.

In convincing Philip Glass to become a primary contributor to the making of the film, Reggio found the perfect analogue to what he was trying to express through the images. The score that Glass composed was groundbreaking and came at a time of new expressivity for the composer. KOYAANISQATSI came at the end of the period when Glass was composing his landmark “Portrait Trilogy” of operas based on people who changed the world through the power of their ideas.

The title of the film comes from the Hopi language, and is defined as:  “life in turmoil, “life disintegrating,” “crazy life,” “life out of balance” or finally, and definitively, “a state of life that calls for another way of living.”

The score is presented here in its complete form, starting with pipe organ and the basso profundo of singer Albert de Ruiter singing the title of the film. The music ends almost 75 minutes later with a choir singing “Prophecies” which are translated as:

This new release represents the first time that the full presentation of the music is heard on vinyl.  The LP release of this Glass score was released in the 1980s in a severely truncated form with only 6 tracks and 45 minutes of music.  This newly re-mastered recording features 12 tracks and over 76 minutes of music including the original sound-effects and additional music used in the film.

This new double album/double gatefold release includes images from the film.  In 2019, Harvard Film Archive acquired the Godfrey Reggio film archive and is currently in the process of documenting and digitizing the collection.  As part of this release, Orange Mountain Music acquired high resolution stills from the film to use as images on this release.