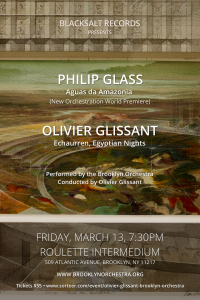 On March 13th across the Brooklyn Bridge near the intersection of Flatbush and Atlantic Avenues, the newly born Brooklyn Orchestra will premiere a new orchestral arrangement of Philip Glass’s AGUAS DA AMAZONIA.

Originally composed as sketches for piano (Seven or Eight Pieces for a Ballet) – then later interpolated by the Brazilian percussion group UAKTI.  In 2015 arranger Charles Coleman made an orchestration which was recorded by Kristjan Jarvi, the MRD Orchester of Leipzig, and the Absolute Ensemble which was recorded and released on OMM.  For this NY premiere of the piece, conductor and founder of the Brooklyn Orchestra Olivier Glissant, a native of Martinique, made his own orchestral version.

The backdrop to this concert is that the long-time orchestra of Brooklyn, the Brooklyn Philharmonic went under in 2012 after being founded in 1954.  It had Glass-champion at the helm for five years in the 1990s and premiered both Glass’s First and Second Symphonies.

I took the time to sit down with conductor Olivier Glissant to talk about this month’s concert:

Richard Guérin: I lived in Brooklyn for many years.  People in Brooklyn know about the history of the illustrious Brooklyn Philharmonic at BAM and the eventual demise of the orchestra in 2012. Tell me a little bit about your orchestra, the Brooklyn Orchestra, and your artistic hopes for the group.

Olivier Glissant: There were a two main impulses which led me to create the orchestra. First, my intention was to attempt to give one more platform to new music and contemporary, active composers, whose works get played much less than established, well known classics. I also hoped to broaden the orchestral repertoire in order to include more of today’s music which does not necessarily fit the classical mold. I wanted to be able to experiment with music from different cultures so that I could appeal to an audience that is not familiar with the symphonic world, while at the same time exposing the traditional classical music audience to new works and new perspectives.

Brooklyn’s population is incredibly diverse and I wanted to create an ensemble that would reflect this multicultural aspect and develop its repertoire accordingly in order to offer a more global representation of today’s music.

RG: Tell me about the program that people will hear on march 13th including where it will take place:

OG: The concert will take place at Roulette Intermedium in Brooklyn. We are presenting a new symphonic orchestration of “Aguas da Amazonia”, which was written by Philip Glass for Uakti, a Brazilian ensemble that plays only instruments that they build. I have always been fascinated by this piece, and wanted to present an orchestral version that did not require those special instruments or players, so as to allow a regular symphony orchestra to play it. I grew up in the Caribbean, at the intersection of the Americas, and was deeply influenced by music from all parts of the continent, but especially Brazilian music, which is how I connected with Philip Glass in the first place. We are also presenting two of my pieces, “Echaurren” (Sketches of a Continent), for string orchestra, and “Egyptian Nights” for full orchestra.

Echaurren is the real name of Chilean painter Roberto Matta. My father (who was a poet but had also a great art critic) wrote texts for many artists, especially during their exhibitions at the Galerie du Dragon in Paris, and I was fortunate to enough to see a lot of them. The gallery was the passage to Europe for many of the great Latin American artists of the 20th century, such as Wifredo Lam, Roberto Matta, Agustin Cardenas, Pancho Quilici (whose painting I used for the concert poster). These artists influenced me profoundly and I wanted to pay hommage to them and to this legendary art gallery and its founders.

“Egyptian Nights” is based on a short story by Alexander Pushkin, and evokes the process of improvisation in artistic creation, which is a crucial element in the history of art in the Americas (like Jazz and so many other genres of music).

RG: Tell me more about this new Glass orchestration.  It was the Brooklyn Phil who commissioned and premiered Symphonies 1 and 2. Furthermore BAM is where Symphony No.8 had its world premiere not to mention all the operas that have been done there over the years.  As you are performing right next door at Roulette Intermedium, were you aware of the connection to Glass’s orchestral music to Brooklyn? Brooklyn really has been an artistic home for him dating back now four decades.

OG: Yes, I am aware of his connection to Brooklyn, especially BAM, and even Roulette, where I saw Dennis Russell Davies perform some of Glass’s piano works with Maki Namekawa a couple of years ago. Then I discovered that Davies, who has been the champion of Glass’s music over the past forty years, was the artistic director of the Brooklyn Philharmonic from 1991-96.

Regarding the orchestration of Aguas da Amazonia, my intent was to convey the fascinating atmosphere, sound and rhythms of the Uakti record using only the symphony orchestra, to allow for performances of the piece beyond Uakti’s concerts. So I purposefully decided to not look at whatever score Philip had given them and proceeded to transcribe the record entirely by ear so that I could attempt to translate its ambience as best I could with the orchestra, which was tough because Uakti’s original instruments, with their mysterious tones and vibrations, create amazing sonorities that are sometimes unclear and hard to reproduce with classical instruments. But it is exactly the process I was referring to when I said I wanted to bring unexpected music to the orchestra repertoire and experiment with genres and styles that were not typically symphonic or classical. It is the same process I am going through for the “Brazilian Suite” (part of my “Pan-American Suites” series), based on music from several Brazilian composers from the early 20th century until the present, in which I try to reproduce the rhythms, swing and particular styles of their music using only the symphonic ensemble. I like to make melodic instruments play the rhythmic elements and put the percussion (which is a huge part of music from all the Americas) in the forefront.

RG: And finally, what do you think the need is that you are addressing with this new orchestra?  What is the Brooklyn Orchestra doing that isn’t being done elsewhere?  You have already touched on it with these pieces and plans, and I have my own ideas about the subject…let me put it this way…I’m guessing that playing Beethoven in 2020 as part of his 250th birthday won’t be part of your planning, ha!

I have no problem playing Beethoven, in fact I was asked to conduct some of his music in the fall! But I feel like we have a duty to represent the music of our era and not live only in the past, however glorious. I think it is necessary to take risks and venture into the unknown, even when we don’t understand it, and it may even help us appreciate our musical heritage even more, and avoid a fatigue effect from overplaying the classical repertoire. I long to conduct Beethoven, Mahler, Brahms, Bach, Bartok, but I think there are enough great ensembles doing that and not enough orchestras playing today’s music. We hope to provide an outlet for today’s composers and be aware of the world around us, keep our minds and our ears open!