Interview with conductor Karen Kamensek, conductor of Philip Glass’s Akhnaten at the Metropolitan Opera from May 19th to June 10th, 2022

Richard Guérin: My first awareness of your work on Philip Glass’s music was seeing your name on the credits for the recording of Les Enfants Terribles. The recording was in the early 2000s but I believe that recording was connected to the original production of the dance-opera in the mid-to late 1990s.  When did you first connect with Philip?

Karen Kamensek: I believe I first met Philip in the early 90’s, though I can’t exactly remember where/when. I was assisting Dennis at the time, and so it was only natural that my path would cross Philip’s at some point sooner rather than later. I had hoped it would since I was already a huge fan, having discovered his music while pursuing my BM at Indiana University from ’87-’91. I know that I was music director for a production of « Woyzeck» at the Public Theater in 1992 (?), which Joanne Akalaitis directed, and for which Philip wrote some music.  We were a small ensemble, placed backstage and piped in through speakers. It was my first paying gig as a young professional musician! There must be some documentation about this, but who knows where! Hahaha!

I believe that my name is listed as assistant conductor on the «Low» Symphony original recording with the BPO. I assisted on a production of Orphée in 1993, which Birgitta Trommler directed at the Jeunesse Musicale Festival in Weikersheim, Germany in 1993 and I was allowed to conduct one or two performances as well. This would’ve been the first European performance of this opera, although it is sadly not credited as such on Wiki. It was also my European conducting debut. That fall we mounted the original co-production (American Repertory Theatre in Cambridge, and BAM) at BAM, and Dennis let me conduct a performance, which was then my NY and US conducting debut.

After that came Les Enfants Terribles, the premiere, the European tour, and the recording in 1997. I think my name is mis-spelled on the CD jacket, unless they re-printed.

RG: You popped up on my Glass radar again when you did the Proms performance of Passages, which, if I’m not mistaken was actually the world concert premiere of the piece?

KK: Indeed Passages was the world concert premiere, and the Paris performance was the 2nd concert performance.  I hope we get to do it again and again.  It’s the most amazing artistic project!  A balm for the soul.

RG: You then did the Passagesagain in France, and then of course these amazing Akhnaten performances. For those involved with Philip’s music for a long time, I wonder how you perceive the language of his music… how it has changed andalso how maybe the reception of it has changed over the years. Akhnaten was famous for its premiere in Germany during which a third of the audience left, a third stayed to boo, and a third remained to give it a standing ovation.

KK: Oddly enough, Glass skeptics or haters generally stay out of my way. Or if they don’t, they see with one look of my eye that they’d better tread carefully with their next comments.  I believe I came to it in Germany long after Akhnaten shook up the scene there. There was already a loyal fan base by the time I moved to Europe in 2000.  I performed CIVIL warS in Freiburg, and in Duisburg, and both times we were so enthusiastically received.  People now travel internationally to see/hear/experience Philip, and we have repeat offenders for Phelim’s production of Akhnaten.  Some have seen it nearly as many times as I have conducted it.

I have also « converted » some of the skeptical or nervous people, by just talking to them about what to expect, and the meaning of the music for me. Although, it is difficult for me to formulate in words what Philip’s music means to me, since I took to it so naturally, and internalised it immediately.  In analysing my life’s path, and therefore my musical path, I do believe that growing up hearing a lot of music of the Balkan region from an early age definitely had an influence on my openness to the possibilities of and the necessity of mixing cultures within the Western classical music realm.

The first piece of Philip’s that I ever came into contact with was Powaqqatsi and it changed my life.  There was a screening at Indiana University shortly after the film was released, and a fellow student said that we needed to go to support this iconic American composer.  I was 18 at the time and had no clue who PG was, but after that screening, I looked up everything I could find out and/or listen to.  To this day, listening to the opening of Powaqqatsi fills me with great joy and excitement.  That moment in the cinema in 1988 opened my mind and heart in a way that no other music had, or has, to this day.  Something in me « clicked », expanded, and changed; and I’ve been chasing that musical high ever since. I didn’t even know that a melding of such different ethnic influences was even musically possible until that moment.

Shortly thereafter, the CD of Passages was released, and of course I got my hands on it and got my mind blown again.  By this time it was certain that I was going to push my way into the conducting profession no matter what, and I remember my inner voice saying « I am going to conduct this someday with Ravi Shankar » and then somehow forgot completely about the piece.  When the Proms contacted me in 2017 about performing the world premiere concert performance, my heart unclenched when I didn’t even know it was clenched, and I literally squealed with glee.  I had the great privilege of performing it with Anoushka Shankar, as Ravi had passed in 2012. I told Anoushka and her mother, Sukanya, about my first moments with the piece in my student days.  Tears were shed. All of the Indian musicians who were involved in that project, as well as myself, were somehow coming full circle in one way or another, either with Philip or Ravi Shankar, and it was simply magical, inspiring, and healing. Philip came for the performance in Paris in 2019, and tears were shed again, and the circle was then complete.

My interactions with Philip’s music definitely come from the ethnographic-musicological side, for sure.  I have a passion for what we tend to call « world music » for lack of a better phrase. By the time I had seen Powaqqatsi, I had already been listening to Indian classical music, and Balkan folk music, among other ethnicities, and thereafter begin connecting the historical dots.  And while PG’s music has naturally developed over time to become perhaps more romantic and more classical in certain ways, it is the cross-cultural/music-without-borders element which inspires me the most in his works. 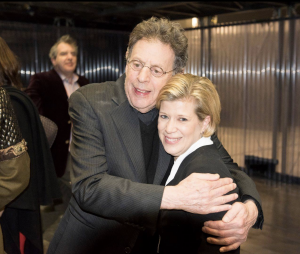